The history of the star: Alchita

from p.181 of Star Names, Richard Hinckley Allen, 1889.
[A scanned copy can be viewed on this webpage 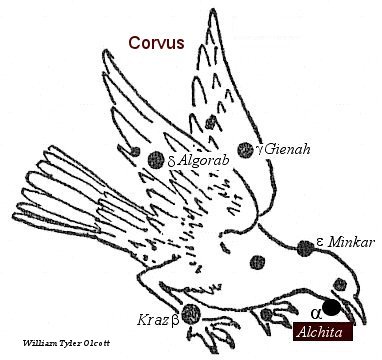 Alpha (α) Corvus, Alchita, is an orange star in the beak of the Raven.

Al Chiba is from the Desert title for the whole Arabic figure of the constellation Corvus; but the 15th century Tartar astronomer Ulug Beg and the Arabian astronomers designated it as Al Minhar al Ghurab, the Raven’s Beak.

Reeves said that it was the Chinese Yew Hea, the Right-hand Linch-pin.

Although lettered first as alpha, it now is so much less brilliant than the four {p.182} following stars of the constellation Corvus that some consider it as having decreased since the 17th century German astronomer Bayer’s day, and perhaps changed in color, for the 10th century Persian astronomical writer Al Sufi called it red.