The history of the star: Al Pherg 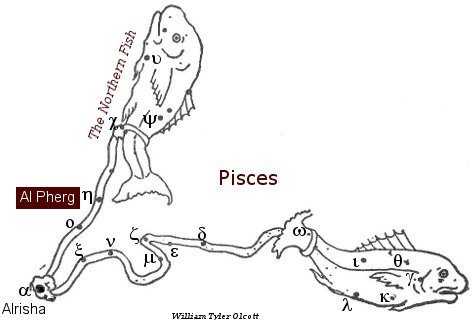 Eta (η) Pisces, Al Pherg, is a double star in the cord near the tail of the Northern Fish.

The German orientalist Epping asserts that this marked the 1st ecliptic constellation of the Babylonians, Kullat Nunu, the Cord of the Fish, which, if correct, would show the origin of the Greek title, and the probable great antiquity of the present figure. Another signification may be the Dwelling of the Fish.

The astrological influences of the constellation Pisces

Legend: Venus and her son Cupid while sitting on the bank of the Euphrates suddenly saw Typhon, the enemy of the Gods, approaching them. They leapt into the river and were saved from drowning by two fishes, who were afterwards placed in the heavens by Venus in gratitude for their help. [Robson, p.57.]

Influences: Ptolemy makes the following observations: "Those stars in Pisces which are in the head of the southern fish have the same influence as Mercury, and, in some degree, as Saturn: those in the body are like Jupiter and Mercury: those in the tail and in the southern line are like Saturn, and, moderately, like Mercury. In the northern fish, those on its body and backbone resemble Jupiter, and also Venus in some degree: those in the northern line are like Saturn and Jupiter." By the Kabalists Pisces is associated with the Hebrew letter Pé and the 17th Tarot Trump "The Stars." [Robson, p.57.]

The astrological influences of the constellation Pisces given by Manilius:

"The folk engendered by the two Fishes, the last of the signs, will possess a love of the sea: they will entrust their lives to the deep, will provide ships or gear for ships and everything that the sea requires for activity connected with it. The consequent skills are numberless: so many are the components of even a small ship that there are scarcely enough names for things. There is also the art of navigation, which has reached out to the stars and binds the sea to heaven. The pilot must have sound knowledge of the earth, its rivers and havens, its climate and winds; how on the one hand to ply the mobile helm this way and that, and brake the ship and spread apart the waves, and how on the other to drive the ship by rowing and to feather the lingering blades. The Fishes further impart to their son the desire to sweep tranquil waters with dragnets and to display on shores which are their own the captive peoples of the deep, either by hiding the hook within the bait or the guile within the weel. Naval warfare too is of their gift, battles afloat, and blood-stained waves at sea. The children of this sign are endowed with fertile offspring, a friendly disposition, swiftness of movement, and lives in which everything is ever apt to change. [Astronomica, Manilius, 1st century AD, book 4, p.243.]

The astrological influences of the star Al Pherg

Of the nature of Saturn and Jupiter. It gives preparedness, steadiness, determination and final success. [Robson, p.134.]