The history of the star: Acrux

from p.191 of Star Names, Richard Hinckley Allen, 1889.
[A scanned copy can be viewed on this webpage 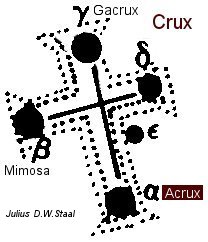 Acrux is probably a word coined from , alpha (α) + Crux (the word can be literally translated into English as “Across“). Its position is defined as near the ankle-bone of the right hind foot of the Centaur (Centaurus), and was zeta (ζ) Centaurus as part of the Centaur as noted by Ptolemy until the Southern Cross constellation was invented in 1679.

Acrux lies 2° east of the equinoctial colure, and, at its culmination, touches the horizon in latitude 27° 30′ on the 13th of May, due south from Corvus

There are no ancient legends or mythology associated with these large stars in Crux because the Cross constellation was unknown to the classicists by its present title, its four chief stars being noted by Ptolemy in Egypt where it was visible as a part of the Centaur Centaurus, which now surrounds it on three sides.

This is also a pre-Christian, Q-R-GH (guttural) word. I suggest more a sense of cross-purposes and energies in conflict. [Isaac Mozeson].

CROSS in The Word: To quote the definition, a CROSS is an upright “beam,” with another beam “fastened” horizontally, upon which the noble Romans would CRUCIFY convicted innocents. The fasteningof boards and the impaling of hands and feet, as well as the CROSS-WISE shape of a CROTCH or CROSS, all recall the term Hebrew KERES (hook, clasp – Exodus2611). Hebrew KORUS is to bow or bend (Isaiah 46:2). KAR-SOL is a joint or ankle, and KHIRSAL is to cross (one’s legs). If a beam is crucial to a CRUCIFIX or any CRISS-CROSS shape, there is KERES(H) (board, plank— Exodus2623) to consider. Derivatives: ACROSS, CLASP, CREASE, CRESCENT, CRISP, CROCHET(Y), CRUISE, CRUSADE, CRUSADO, CRUX and LACROSSE.

The astrological influences of the constellation Crux

“Crux is said to give perseverance, but many burdens, trials and responsibilities, together with much suffering and many hardships. In connection with rulerships of countries it may be noted that Brazil was named the Land of the Holy Cross by the discoverer Cabral on May 1st 1500, and that the constellation Crux has been represented on the postage stamps of that country”.  [Robson, p.41.]

The astrological influences of the star Acrux

It gives religions beneficence, ceremonial, justice, magic and mystery, and is frequently prominent in the horoscopes of astrologers and occultists. [Robson, p.116.]

[Interpretations for alpha and beta Crux – Acrux and Mimosa] Inventive mind, intuition and wisdom, a grasp for the inner nature of one’s fellow man. The gift of successful investigation of the hidden side of things. A deeply religious nature connected with mystical and theosophical interests. [Fixed Stars and Their Interpretation, Elsbeth Ebertin, 1928, p.63.]